“Jane Eyre” – How Do Classic Gothic Romances Compare to Modern Novels Like “Twilight”?

Posted on September 28, 2011 by Tales Untangled

(We liked this cover even though it is not the version we read, the sky is a bit gothic.) 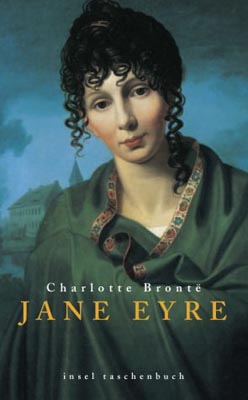 Jane Eyre is orphaned and destitute. She lives with her aunt Sarah Reed where she is physically and emotionally abused. She is moved to a small school with austere conditions where she meets her friend Helen Burns, who dies in Jane’s arms because of the poor living conditions.

Encouraged by Miss Temple, Jane advertises to find a position as a governess. She accepts a position to care for Adèle, the ward of Mr. Edward Rochester. Mr. Rochester feels bewitched by Jane because of her good character and charms. Jane is wooed by Mr. Rochester and has agreed to become his wife, however the wedding is stopped with the discovery that he is already married. Mr. Rochester’s mad wife, Bertha Mason, is imprisoned upstairs and is responsible for the mysterious events that occur when she escapes from her prison under the watch of Grace Poole who becomes inebriated occasionally.

Jane refuses to live a life of sin with Mr. Rochester and runs away. Upon the moor she draws upon her last reserves, but collapses upon the doorstep of St. John Rivers and his sisters. As she is taken in by this family she believes she has found a home and is delighted to find that they are all cousins. Fortunately, Jane inherits all of the money from her uncle John, and she chooses to share the boon with her new found family. Jane is given the opportunity to marry her cousin, St. John, but refuses because she knows she will not be loved and only used as a tool for missionary work in India. Unaccountably Jane hears the voice of her beloved Mr. Rochester calling to her from across the moor. Jane knows she must return.

Thornfield is in ruins from a fire caused by the mad Bertha, and Mr. Rochester has been maimed and blinded. Mr. Rochester is finally free of his mad wife because of her suicide and finds a measure of redemption from his own sins from his injuries. Jane is able to convince Edward that she loves him and with his promises to be better they are joyfully married.

Jane Eyre is a classic because of themes of love, redemption and sacrifice. As a Gothic Romance it has the ability to use supernatural elements to progress the theme without depending upon logic.

Gothic Romance combines elements of supernatural horror with romance. Physical and mental abuse, madness and secrets are all common element used in the Gothic genre. The setting in a Gothic novel sets the tone for the entire story, with a castle or old building that holds its own secrets. The weather will also mirror the feelings of the characters, also called pathetic fallacy. Gothic novels employ the use of a Byronic hero.

Here is a photo of North Lees Hall, probably the inspiration for Brontë’s Thornfield. 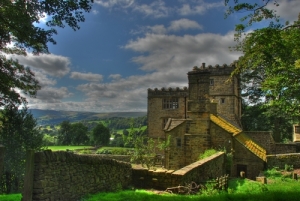 I chose this particular one because of the moody sky, quite Gothic.

Jane and her family stayed in North Lees Hall, and it had originally been owned by a woman who was mad and locked in a padded room.

I wondered how my teen would react to this Gothic genre because such odd things happen that don’t really follow a straight line of reason. My new conclusion is that romance is beyond reason, in literature and in life.

I began comparing some of the Gothic elements in Jane Eyre to a modern romance novel, Twilight, and found some similarities. To clarify I am NOT suggestion that the quality of writing is the same, just some of the elements. Edward Cullen (in Twilight) is certainly of Byronic hero proportions exhibiting the same nature as Mr. Edward Rochester. They are both haunted by demons and can only be saved by their angelic counter-parts Bella/Jane. Rainy, moody Forks, OR (from Twilight) reflects Bella’s mood and sets the tone for a “horror” novel even as Thornfield uses pathetic fallacy. There are females in distress, strange voices calling to the female protagonists, and Twilight has the creatures of vampires and werewolves, while Jane Eyre has the contrast with the Catholic church, all Gothic elements.

The female protagonists diverge in these two novels. Bella, in Twilight, wants independence, however, she is weak, needing protection, and quite whinny. Jane, in contrast, has a wonderful transformation. Jane develops from an abused child into a young woman who develops a moral code that she will follow regardless of negative consequences. Jane is independent, as shown by her scheme to maintain her position as a governess to Adele, even after the proposed marriage to the wealthy Mr. Rochester. Jane is a well rounded woman.

I now realize why my teen daughter liked Jane Eyre, it is a Gothic Romance, and that is a genre she is familiar with from Twilight, Tiger’s Quest and other “Modern” Gothic Romances. Once again, there is nothing new under the sun! (I want to look at Pride and Prejudice again and see if I would classify Mr. Darcy as a Byronic hero even though it doesn’t have the other Gothic elements.)

One more note, I just had a thought that the predecessor to the Gothic Novel could be considered in the Passion Plays (or Mystery Plays) of the Middle Ages which used supernatural elements to tell allegorical stories. Do you think this could be true?

I absolutely loved this book! It was very complex and I couldn’t put it down. Jane Eyre has to be the best romance novel I’ve read. I loved the characters and how they developed and the passion Jane and Mr. Rochester shared. Mr. Rochester was one of my favorite characters. Who else dresses up as a gypsy to trick people into telling him their secrets? It surprised me that Jane, who was almost twenty, was in love with a forty year old man. I understand that it was common in that time period, but I thought it was strange still. It also was strange, to me, that Jane’s cousin proposed to her! I loved this book and suggest it to all and everyone.

I am a mother of four children and have a passion for reading. I love sharing my treasury of books with my kids. I also do experiments in cooking which includes such things as Indian Tandoori Chicken slow-cooked in a tagine. I write stories and illustrate in ink.
View all posts by Tales Untangled →
This entry was posted in All Time Favorites, grown up books reviewed, literary classics in review, young adult book reviews and tagged arrogant, Bertha Mason, brooding man, byronic hero, classic literature, classical literature, compared to Twilight, emotional abuse, forgiveness, Gothic Romance, governess, Grace Poole, independent women, inheritance, Jane Eyre, madness, Mr. Edward Rochester, North Lees Hall, pathetic fallacy, physical abuse, redemption, relationships, Rochester as a gypsy, suffering, supernatural elements, the moor, Thornfield, timeless themes in literature, what makes a classic a classic, women who redeem the man they love. Bookmark the permalink.