“Elegy For Eddie, A Maisie Dobbs Novel” – An Appraisal of the Times, Society and Introspection 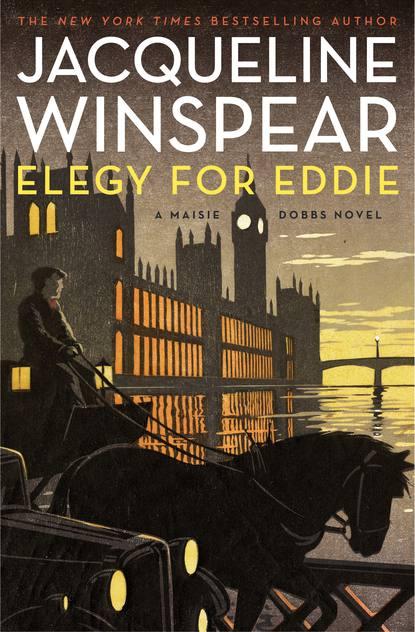 Maisie Dobbs has lived in two worlds, growing up she was part of the serving class and due to fortunate circumstances she is now among the privileged class. These two worlds collide leaving Maisie questioning where she truly belongs.

Eddie Pettit was a gentle man with a special talent working with horses, unfortunately he was killed in a tragic accident. The costermongers are convinced that his death was not an accident and have hired Maisie to find out who is responsible. During the course of the investigation Maisie discovers that there are connection with a press baron, Douglas Partridge, the husband of her best friend, and Winston Churchill. As the lies grow Maisie finds national security may be at risk and she is in a personal dilemna of how to resolve the case and see justice.

Winspear has a unique way of capturing Europe during the bleak times surrounding the Great Wars. I find that I am fascinated by her stories and pulled in, and yet I wouldn’t say the novels are uplifting or cheerful, but rather they are grey.

Elegy For Eddie was not my favorite in the Maisie Dobbs series, yet I was still enthralled while reading to better understand how all the threads would be woven together. Maisie’s character is quite complex as she tries to sort out her feelings and learn how to work with others. I was hoping that she had put aside all her feelings of inadequacy and would be able to move forward with ease. I am very disappointed that Maisie is having second thoughts about her relationship with James, it seemed like they both deserve something good that they could have found in each other. I also feel unsettled that Maisie would allow murderers to slip away so easily even if it was for “national security”. The death of the investigative writer seemed to be left as a bit of a loose end. The newspaper baron, though not directly responsible for Eddie’s death, surely knew his orders for silence were likely to result in his death. And finally, Maisie accepted that the costermongers had taken justice into their own hands to avenge Eddie, and even felt responsible for their actions because she should have predicted that they would see justice done as they saw fit.

It is interesting to speculate on the state of mind English citizens may have had recovering from WWI and their wariness to enter another war. I believe that Elegy for Eddie makes a reasonable case that the general citizens were unaware of the possible consequences of the rise of Hitler to power, while the politicians and others in power may have been more aware and proactive in their approach.

The previous books in the series are 1. Maisie Dobbs  2. Birds of a Feather 3. Pardonable Lies 4. Messenger of Truth 5. An Incomplete Revenge 6. Among the Mad 7. The Mapping of Love and Death 8. A Lesson in Secrets

Book Review : Leaving Everything Most Loved, A Maisie Dobbs Novel
by Jacqueline Winspear 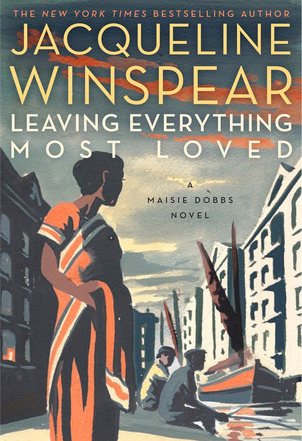 The death of an Indian immigrant leads Maisie Dobbs into a dangerous yet fascinating world and takes her in an unexpected direction.

London, 1933. Two months after the body of an Indian woman named Usha Pramal is found in the brackish water of a South London canal, her brother, newly arrived in England, turns to Maisie Dobbs to find out the truth about her death. Not only has Scotland Yard made no arrests, evidence indicates that they failed to conduct a full and thorough investigation.

Before her death, Usha was staying at an ayah’s hostel alongside Indian women whose British employers turned them out into the street–penniless and far from their homeland–when their services were no longer needed. As Maisie soon learns, Usha was different from the hostel’s other lodgers. But with this discovery comes new danger: another Indian woman who had information about Usha is found murdered before she can talk to Maisie.

As Maisie is pulled deeper into an unfamiliar yet captivating subculture, her investigation becomes clouded by the unfinished business of a previous case as well as a growing desire to see more of the world, following in the footsteps of her former mentor, Maurice Blanche. And there is her lover, James Compton, who gives her an ultimatum she cannot ignore.

Bringing a crucial chapter in the life and times of Maisie Dobbs to a close, Leaving Everything Most Loved marks a pivotal moment in this remarkable series.
(Courtesy of goodreads.com)

One of the things I like about the Maisie Dobbs books is that they are not overly glamorous and sensational, however, they are thought provoking, provide historical insight and have wonderful characters. I particularly liked this Maise Dobb novel because it shows possible ramifications of British colonialization and prejudice. I also love a mystery when I am left with enough clues that I feel I should have been able to solve it, but can only guess “who done it” moments prior to the reveal.

Winspear did a wonderful job building the character Usha Pramal. Usha dies in the first few pages of the novel, but as the story progresses we learn more about what kind of woman she was and her fascinating personality and foibles. As I reflect back over this novel Usha is actually one of my favorite secondary characters in the series. Maisie has continued to grow in her deductive reasoning and believability as a detective. I am sorry that this novel seems to be a big set up for Maisie to let James go while she will continue to struggle with her demons of coming out of poverty and the affects of WWI. I would like to see Maisie  be able to have a normal relationship that grows into love and marriage. Though balancing a career and marriage is perhaps too blasé for a mystery novel.

I highly recommend this series.

I am a mother of four children and have a passion for reading. I love sharing my treasury of books with my kids. I also do experiments in cooking which includes such things as Indian Tandoori Chicken slow-cooked in a tagine. I write stories and illustrate in ink.
View all posts by Tales Untangled →
This entry was posted in grown up books reviewed and tagged effect of press on society, Elegy For Eddie, England, historical fiction, Hitler, Maisie Dobbs, mystery, pre-WWII, private investigator, rags to riches, strong female character, Winston Churchill. Bookmark the permalink.