Posted on September 21, 2012 by Tales Untangled 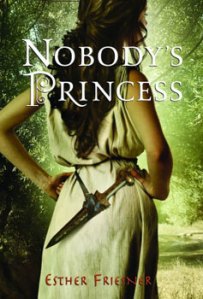 Clytemnestra weaves, embroiders and pines away for getting married. Helen isn’t anything like her twin sister. She has determined she never wants to marry, would like to go on heroic adventures and to learn sword work. In other words, Helen just wants to be free. Free from everything expected of the future queen of Sparta.

Through her determination she sets out to make her own path. She develops friendships with Atalanta the huntress, the priestess Eunike, who is the Oracle of Delphi, and even Milo, an ordinary boy. Of course Helen makes a few enemies as well along the way. Will Helen escape marriage and get to lead a life of adventure?

Nobody’s Princess is written as historical fiction, and it does portray a time in history in addition to the iconic Helen of Troy (though here she is known as Helen of Sparta). I enjoyed Nobody’s Princess because Helen had to grow into her beauty and was more interested in developing her talents. I vividly remember awkward moments growing up and Helen’s life is full of those awkward moments. It is also a lot of fun to see how Sparta’s people might have related to the Greek gods, women’s accepted roles and politics. Helen’s character is very likable and is a strong role model for girls (in the class who wield swords and are athletic).

The hunt for the Calydonian boar showed Atalanta’s character that she would cheer for Meleager along with the others when the boar could have been justifiably called her kill as well. Atalanta has a huge impact on Helen’s character and her perception of the things women can accomplish.

Eunike had a dual personality, that of a giddy young girl when she was out of the public eye and a mysterious powerful being as the Oracle. The mysticism that was present in their society supported her as being an oracle, but it was interesting that she really was youthful in her thoughts and actions otherwise. It was nice for Eunike and Helen to develop a friendship when neither had had opportunities for many relationships with their peers due to their station in life.

I would recommend this book for girls in middle school.

I read this when I was in middle school and I liked it at the time. It was fun.

I am a mother of four children and have a passion for reading. I love sharing my treasury of books with my kids. I also do experiments in cooking which includes such things as Indian Tandoori Chicken slow-cooked in a tagine. I write stories and illustrate in ink.
View all posts by Tales Untangled →
This entry was posted in young adult book reviews and tagged adventure, Atalanta, Calydonian boar, Esther Friesner, Eunike, gay, Greek mythology, Helen of Sparta, Helen of Troy, Herakles, historical fiction, homosexuals, Meleager, Nobody's Princess, Nobody's Prize, Oracle of Delphi, Queen of Sparta, quest, strong female protagonist, traditional women's roles. Bookmark the permalink.