“Number the Stars” – Is This WWII Novel Appropriate for Sixth Graders? 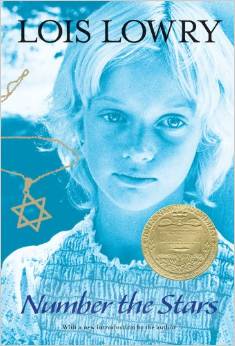 Ten-year-old Annemarie Johansen and her best friend Ellen Rosen often think of life before the war. It’s now 1943 and their life in Copenhagen is filled with school, food shortages, and the Nazi soldiers marching through town. When the Jews of Denmark are “relocated,” Ellen moves in with the Johansens and pretends to be one of the family. Soon Annemarie is asked to go on a dangerous mission to save Ellen’s life. (Courtesy of goodreads.com)

Our sixth grade has been assigned to read a book about WWII. I believe it is important to know the history of the world. I also think such a serious subject needs to be handled carefully in elementary school. I wanted to find out was if Number the Stars was appropriate for a young audience and to determine if the information is accurate.

Lowry’s novel is historical fiction. The characters are not real people though they are a realistic composite of real people. The Danish monarch, Christian X, choose not to fight occupation because he knew his country did not have the military strength to resist. The Danish Resistance risked their lives to smuggle out the Danish Jewish population to Sweden. The reader does not directly witness the deaths of any of the characters, but later discovers that Annemarie’s sister and almost brother-in-law were killed because of their actions in the Danish Resistance.

This is a book that is fully appropriate for a young audience. The reader learns of the fear caused by the Nazi military, but is shielded from the extent of the horrors of WWII. I was impressed with the courage of the Danish people who risked their lives to save others. I feel that the interest level is geared to girls rather than boys, though I know many schools do it as a class project. I highly recommend this novel.

I am a mother of four children and have a passion for reading. I love sharing my treasury of books with my kids. I also do experiments in cooking which includes such things as Indian Tandoori Chicken slow-cooked in a tagine. I write stories and illustrate in ink.
View all posts by Tales Untangled →
This entry was posted in children's books, Newberry & Awarded Books, young adult book reviews and tagged 1943, Annemarie, Annemarie Johansen, appropriate for children, Copenhagen, danger, Danish Resistance, Denmark, elementary school, Ellen Rosen, escape, historical fiction, King Christian X, Lois Lowry, Nazi, Number the Stars, Number the Stars By Lois Lowry Spoiler Alert, occupation, relocated, sixth grade reading, Sweden, war, WWII. Bookmark the permalink.