“The King of Attolia” – What A Difference Great Writing Makes!

Book Review: The King of Attolia
By Megan Whalen Turner 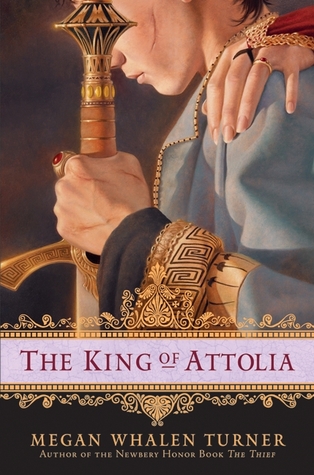 By scheming and theft, the Thief of Eddis has become King of Attolia. Eugenides wanted the queen, not the crown, but he finds himself trapped in a web of his own making.

Then he drags a naive young guard into the center of the political maelstrom. Poor Costis knows he is the victim of the king’s caprice, but his contempt for Eugenides slowly turns to grudging respect. Though struggling against his fate, the newly crowned king is much more than he appears. Soon the corrupt Attolian court will learn that its subtle and dangerous intrigue is no match for Eugenides.

I almost always like the first book in a series best. The King of Attolia has me in a quandary if I like the first or third best. Gen is an all time favorite character and he is up to form in this book.

Too many authors use cheap tricks and overused plots to try to have a hit in writing to the young adult audience. What a difference good writing makes! One of the things I enjoy in Turner’s writing are the subtle clues to the unseen machinations. Those who have been unwittingly manipulated are as stunned by the revelations as I am. It takes real genius to know how to write without revealing everything in a sequential manner and still have it make sense. The kingdom of Attolia is rife with political intrigue from within as well as the external pressures of threatening neighbors.

There are two problems, the first is that I still don’t feel very connected to the Queen of Attolia. I need something more out of her character to feel that she deeply loves, and deserves Gen. The second problem is that I need Turner to write books more quickly. I completely understand that raising kids is a full time job since I also have this job. If she lived close by I would offer free babysitting services, but since she insists on living in Ohio it is truly too far for me to help her. Perhaps someone in Ohio could volunteer their services to help all of her fans.

Favorite lines to look for and will be later be understood in context include:

“‘What’s your excuse?’ For hearing gods and seeing impossibilities.”

“You made the notes on the Mede language,”

Hopefully those don’t take away any of the fun of discovery on your own.

I highly recommend this series. If you like The Thief series try A Cast of Stones by Patrick W. Carr. These authors use wonderful language and have unique worlds.

I am a mother of four children and have a passion for reading. I love sharing my treasury of books with my kids. I also do experiments in cooking which includes such things as Indian Tandoori Chicken slow-cooked in a tagine. I write stories and illustrate in ink.
View all posts by Tales Untangled →
This entry was posted in All Time Favorites, young adult book reviews and tagged adventure, appropriate for junior high students, appropriate for middle grade students, compare to A Cast of Stones, Euginides, fantasy, Gen, Honor Newberry Writers, intrigue, machinations, Megan Whalen Turner, plolitical intrigue, Queen of Attolia, subtle writing clues, The King of Attolia, the thief, turmoil. Bookmark the permalink.