Flamecaster – The Seven Realms Live On 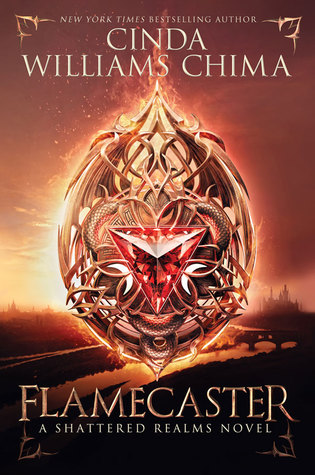 Adrian sul’Han, known as Ash, is a trained healer with a powerful gift of magic—and a thirst for revenge. The son of the queen of the Fells, Ash is forced into hiding after a series of murders throws the queendom into chaos. Now Ash is closer than he’s ever been to killing the man responsible, the cruel king of Arden. As a healer, can Ash use his powers not to save a life but to take it?

Abandoned at birth, Jenna Bandelow was told the mysterious magemark on the back of her neck would make her a target. But when the King’s Guard launches a relentless search for a girl with a mark like hers, Jenna assumes that it has more to do with her role as a saboteur than any birth-based curse. Though Jenna doesn’t know why she’s being hunted, she knows that she can’t get caught.

Eventually, Ash’s and Jenna’s paths will collide in Arden. Thrown together by chance and joined by their hatred of the king, they will come to rescue each other in ways they cannot yet imagine.

Set in the world of the acclaimed Seven Realms series a generation later, this is a thrilling story of dark magic, chilling threats, and two unforgettable characters walking a knife-sharp line between life and death. (Courtesy of goodreads.com)

I was a little worried to start this book because so many fans of the Seven Realms series were so upset over a tragic event. This is a huge spoiler, so you are warned not to read this section if you don’t want any spoilers. Han, the father of Ash, is killed in an ambush. I am obviously sad to lose a character I loved so much from the Seven Realms, but it would have been much more terrible if he and his beloved Raisa were no longer in love ,or even worse, had grown to despise one another. I completely understand the necessity for the death of Ash’s father to be the motivating factor for his life; to train will greater intensity in the administering of death, and ultimately to devise the death of the hated king of Arden.

I enjoyed Flamecaster and was rooting for Ash to find a balance in his life. Despite the tragic circumstances that led him to flee his kingdom, he retains a compassion for others. His magical gifts can be seen as both a curse and a blessing. Jenna seems like she could have come out of the Victor Hugo’s novel Les Miserables on the front lines of the French Revolution. She is conflicted in not valuing her own life and still retaining the ability to care for others, as she fights for a cause she believes in wholeheartedly.

I always seem to like the way Chima writes her characters and their romantic connections. It seems inevitable that Ash and Jenna will fall in love, however, this romance will be more complicated than the usual boy meets girl and falls in love variety of romance. Chima is an expert on romantic tangles and moves things along at a smolderingly slow pace.

Have you not been wishing there were dragons in the Seven Realms? Well, there are! I can imagine dragons are not too fond of being chained up in a boat’s hull. And this dragon was definitely not pleased, an escaped dragon is definitely problematic. And then, to make matters worse, the emissary is not who he appears to be. But who is he?

Chima throws in these few tidbits in just the last few pages to whet the readers appetite for the next Shattered Realms novel, and I’m anxious for the next one!

If you liked this one you might like The Queen’s Poisoner by Jeff Wheeler and A Cast of Stones by Patrick W. Carr, Incarceron by Catherine Fisher and The Raven Ring by Patricia C. Wrede.