Posted on November 3, 2016 by Tales Untangled 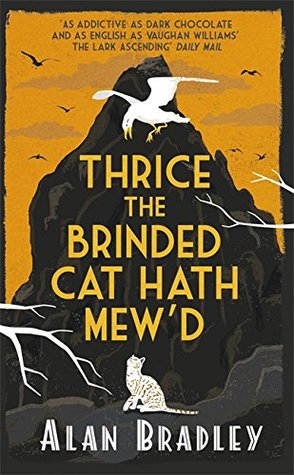 In spite of being ejected from Miss Bodycote’s Female Academy in Canada, twelve-year-old Flavia de Luce is excited to be sailing home to England. But instead of a joyous homecoming, she is greeted on the docks with unfortunate news: Her father has fallen ill, and a hospital visit will have to wait while he rests. But with Flavia’s blasted sisters and insufferable cousin underfoot, Buckshaw now seems both too empty—and not empty enough. Only too eager to run an errand for the vicar’s wife, Flavia hops on her trusty bicycle, Gladys, to deliver a message to a reclusive wood-carver. Finding the front door ajar, Flavia enters and stumbles upon the poor man’s body hanging upside down on the back of his bedroom door. The only living creature in the house is a feline that shows little interest in the disturbing scene. Curiosity may not kill this cat, but Flavia is energized at the prospect of a new investigation. It’s amazing what the discovery of a corpse can do for one’s spirits. But what awaits Flavia will shake her to the very core.
(Courtesy of goodreads.com)

One of my favorite characters in the Flavia de Luce novels is Gladys, Flavia’s bike. I never would have guessed that personifying a bike could be so charming.

“Gladys’s wheels groan horribly beneath us. The biting cold has penetrated her steel bones and seized the tendons of her brake cables. She judders wickedly on the slick tarmac, threatening to skid off the road entirely and pitch me into the icy ditch.
I want to scream into the wind, but I don’t. One of us, at least, must keep her wits about her.” (p. 3)

“Gladys gave a little squeak of delight. She loved coasting as much as I did, and if there was no one in sight, I might even put my feet up on her handlebars; a bit of bicycle artistry that she loved even more than ordinary free-wheeling.” (p.27-28)

“Gladys was waiting patiently where I had left her, as I knew she would be, although she was now wearing, on her seat, a dunce’s cap of snow, as if to welcome me home with a practical joke.” (p. 134)

You will have to read the novel to find other Gladys sightings.

Another moment I love is when Flavia describes her new found maturity now that she is eleven and returned from Canada.

“Sophistication was what was called for. Should I put a flower  behind my ear? …
Perhaps I would just stroll in, sit down at the breakfast table and light a cigarette. That would certainly signal a new maturity.
But the problem was this; I didn’t smoke. It was a filthy habit. And, furthermore, I had no cigarettes.” (p. 16)

Flavia also describes learning to have charity. Her example explains the forbearance she used when her cousin Undine had suggested she call her Undies, and she refrained. Now that is true charity!

My favorite Flavia books are the first four. Thrice the Brinded Cat Hath Mew’d isn’t my favorite, but certainly not my least favorite. If you have read the others it is worth reading.

I love the odd titles and seeing how Bradley ties them into the events in the novel. This novel refers to a witch in Macbeth. I was surprised how Bradley wove a witch into the plot. I think Bradley does an incredible job of capturing female characters, and especially a young precocious tween. I am continually amazed that a man can write young girls in such a believable fashion.

Here are my complaints with this novel. Flavia’s father is sick in the hospital and no one makes any effort to take Flavia to see him. Even to the point that they leave her sleeping in bed, after solving an exhausting crime, when they head out to visit him in the hospital. Even his niece, Undine, has had the opportunity to visit him while he has been sick.

Huge Spoiler Alert!!! Do Not Read This Little Section If You Want To Be Surprised!!!!

I didn’t feel there was foreshadowing for Flavia’s father’s death and I don’t see the purpose in removing him from the series. The death of Flavia’s beloved chicken Esmerelda, is the closest thing the reader had to a warning of the upcoming event or perhaps Crispin’s mourning over the loss of his father. That’s the best I can come up with after thinking about this for a week. Even though he played such a minor role he played a key part in the character of Flavia. This whole thing was played out in a strange manner.

Done with the Huge Spoiler. You may continue reading…

I also felt like the murder was a little more gruesome than the previous deaths that Flavia solved. It didn’t bother me too much, but it felt a little too Da Vinci Code by Dan Brown.

Finally, Flavia didn’t interact with her sisters or cousin very much and I like to have their relationships as a secondary plot line. I didn’t grow up with sisters, but I enjoy their complicated relationship. Flavia still gets to converse with the boys hoping to secure Feely’s love.

I would recommend this novel, if for no other reason than to enjoy Gladys.

If you liked this one you might like The Evolution of Calpurnia Tate by Jacqueline Kelly, 44 Scotland Street series by Alexander McCall Smith and Moon Over Manifest by Clare Vanderpool.

I am a mother of four children and have a passion for reading. I love sharing my treasury of books with my kids. I also do experiments in cooking which includes such things as Indian Tandoori Chicken slow-cooked in a tagine. I write stories and illustrate in ink.
View all posts by Tales Untangled →
This entry was posted in grown up books reviewed and tagged A Flavia de Luce novel, Alan Bradley, England, Flavia de Luce, Flavia's bike, Gladys the bike, light mystery, murder mystery, mystery, post-WWII, references to Shakespeare, sisters, spoiler alert, Thrice the Brinded Cat Hath Mew'd. Bookmark the permalink.