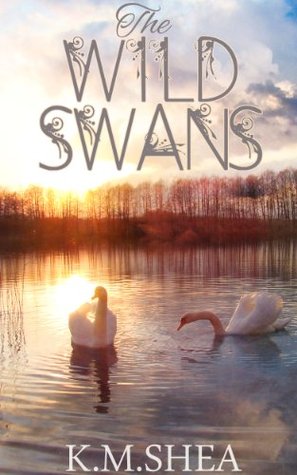 Elise is the foster-daughter of the King of Arcainia, a mathematician, and the country’s treasurer. She is not a hero. But when her step-mother, a wicked witch, curses Elise’s seven foster-brothers—the princes of Arcainia—and turns them into swans, Elise is the only one who can save them.

To break the curse, she must knit seven shirts made of stinging nettles, but there’s a catch. She has to complete the shirts without uttering a word, and if she doesn’t finish the task, Arcainia and her foster-brothers will be lost.

THE WILD SWANS is a retelling of the German Six Swans fairy tale and the Dutch Wild Swans fairy tale. It is a story of humor, love, adventure, and magic, and it is part of the top selling Timeless Fairy Tales series—a series comprised of loosely related adaptations of your favorite fairy tales. All Timeless Fairy Tales take place in the same world and can be read all together, or as individual, stand-alone books. (Courtesy of goodreads.com)

I am not familiar with the German fairy tale of Six Swans so this fairy tale didn’t hold as much interest for me.

Elise, as the foster daughter of the king, has a lot of doubts about her place in the family. She continually feels like she has to prove her worth. She is incredibly smart with finances and has been the keeper of the royal treasury and keeps everyone on a tight budget. She has felt that her position with the treasury was a sign of the King’s trust in her abilities. The seemingly impossible task to knit seven shirts of stinging nettles is yet another way that Elise feels she needs to prove herself to the family. She would go through the agony regardless because of her deep love of her foster family.

I had a couple of questions:

The Wild Swans didn’t really seem to have many twists or unusual plot devices. Shea does have a small twist at the end, the reader gets to choose who Elise will fall in love with after the wicked witch is killed. Of course, I read both versions and felt strongly that the one was more in line with the characters than the other. Elise finds her place and is more than content by the end. It is a clean romance and still a fun read.

Other retold fairy tales that I enjoy include Beauty by Robin McKinnley, The Goose Girl by Shannon Hale and Enchantment by Orson Scott Card.

This has been my least favorite in the series that I have read thus far.

I am a mother of four children and have a passion for reading. I love sharing my treasury of books with my kids. I also do experiments in cooking which includes such things as Indian Tandoori Chicken slow-cooked in a tagine. I write stories and illustrate in ink.
View all posts by Tales Untangled →
This entry was posted in young adult book reviews and tagged Dutch Wild Swans, Elise, Enchantress in training Angelique, fairy tales, fairy tales retold, fantasy, foster brothers, German Six Swans, K.M. Shea, King of Arcainia, magic, step-mother, stinging nettles, The Wild Swans, wicked witch. Bookmark the permalink.