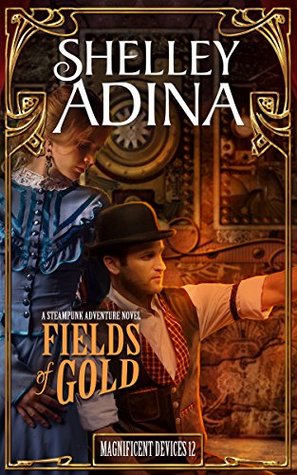 Book 12 in the Magnificent Devices steampunk series!
If a wedding won’t stop a war, what will?

Gloria Meriwether-Astor’s belief in doing the right thing has carried her across the world and through dangers that would have felled a lesser woman. She believed that if she married the dashing Captain Fremont, she could approach the Viceroy of the Royal Kingdom of Spain and the Californias with impunity. She could convince the prince to stop the war their fathers began, and then she could return to Philadelphia with her husband, her conscience clear at last. Sadly, belief and reality are two different things. The prince agrees to her proposal on one condition—that she annul her marriage and become his wife instead!

Every woman has a threshold she will not cross. Gloria has come to love her riverboat captain, and the price of peace is simply too high. But when the evil stalking the pleasant gardens of San Luis Obispo de Tolosa claims its victim, the time for belief is over and the time to act—daringly, outrageously—is at hand. Do the witches hold the key to a way out of this trap?

All Gloria has to do is take up the crown of roses and play for the highest stakes. All she has to do is become the iron dragon, and start a war of her own.
(Courtesy of goodreads.com)

Gloria has the honor of being a character that I had cast off as uninteresting in the beginning of the series, but as Adina has continued the series, Gloria has become a character with depth. The riverboat captain, Stan, could be the prototype for mysterious men with an unknown background that are great at supporting a woman in her role as the protagonist. Real men are never so biddable. Anne McCaffrey always wrote male characters that served as a support for the women in their world. This is not to say the men are not strong, they are very masculine because women really do want a man who is strong in character and body. Gloria is in a tight spot, in love with her husband while a prince is in love with her; and she could stop the brewing war by simply annulling the marriage and instead marry the prince. Just because Gloria has two men in love with her it doesn’t mean Evan is out of the picture; he still pines away for Gloria. What is a girl to do?

The tale continues with the plot snaking towards an end with betrayal, love, secrets, more love, stolen kisses, unexpected surprises, the lost who are found, explosions, guns blazing and more love. Whew! In other words, just what you have come to expect in a Magnificent Devices book.

Previously I have stated there are a couple of good ending spots in this series if you’re not up to the full 12 (written so far, since there is a tantalizing loose end ready to be resolved). The fourth book, after the Lady of Devices is married is a good stopping point. Another stopping point would be when her charges, the Mopsies, are settled. Book 12 is another good stopping point because all of the main characters stories are resolved. I’ve enjoyed it immensely, but even I think I will give the Devices a break.

There is nothing more than a few kisses described in detail in this series. A rape is mentioned and there is an obvious lesbian relationship that readers may want to be aware of in advance.

If you enjoyed this book try Cinder by Marissa Meyer and The Screaming Staircase by Jonathan Stroud.

For good clean, fun romance to try is Sorcery and Cecelia or The Enchanted Chocolate Pot by Caroline Stevermer and Patricia Wrede.

Another great fantasy to try is Cast of Stones by Patrick W. Carr.