Thick As Thieves – Books Worth Rereading 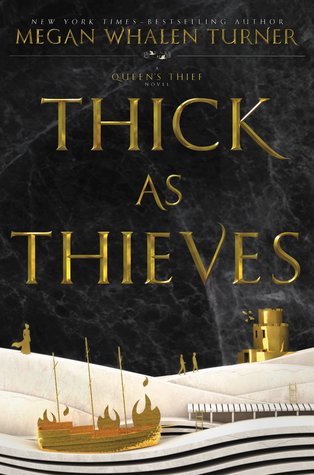 Deep within the palace of the Mede emperor, in an alcove off the main room of his master’s apartments,. Kamet minds his master’s business and his own. Carefully keeping the accounts, and his own counsel, Kamet has accumulated a few possessions, a little money stored in the household’s cashbox, and a significant amount of personal power. As a slave, his fate is tied to his master’s. If Nahuseresh’s fortunes improve, so will Kamet’s, and Nahuseresh has been working diligently to promote his fortunes since the debacle in Attolia.

A soldier in the shadows offers escape, but Kamet won’t sacrifice his ambition for a meager and unreliable freedom; not until a whispered warning of poison and murder destroys all of his carefully laid plans. When Kamet flees for his life, he leaves behind everything—his past, his identity, his meticulously crafted defenses—and finds himself woefully unprepared for the journey that lies ahead.

Pursued across rivers, wastelands, salt plains, snowcapped mountains, and storm-tossed seas, Kamet is dead set on regaining control of his future and protecting himself at any cost. Friendships—new and long-forgotten—beckon, lethal enemies circle, secrets accumulate, and the fragile hopes of the little kingdoms of Attolia, Eddis, and Sounis hang in the balance. (Courtesy of goodreads.com)

It takes her a very long time to complete a new book and once you start you will want to finish reading the series!

Review of Thick As Thieves

Kamet was introduced as a minor character in The Queen of Attolia, and now he is the main character in Thick As Thieves. Kamet has an interesting struggle. He is caught not wanting to go to Attolia, which he sees as an uncivilized country soon to be swept away by the Mede Empire, and his incumbent death as a result of his master having been poisoned, most likely by his brother the emperor. Kamet misjudges the soldier sent by the King of Attolia, seeing him as stupid rather than honest. Overtime they build a friendship, which is something Kamet has never really had as a slave. Slaves don’t really do favors for each other.

In Thick As Thieves, Kamet tells stories of Immakuk and Ennikar, legendary heroes who interact with a pantheon of gods in the Ensur mythology (adopted by the Medes), to the soldier accompanying him on his journey. Immakuk and Ennikar have trials with maids, being lost, being dead, attacked by monsters and needing each other’s friendship. To help clarify these two heros; Ennikar is described as strong, brave, but not described as smart. Immakuk is described as noble, brave, canny, wise. This is the typical kind of layer Turner adds in her books that I enjoy. It’s also another reason to reread her books. It’s fun to look for the clues laid out for the surprise ending.

I also love how Eugenides is always misunderstood and underestimated. He isn’t introduced until the end of the novel, though Kamet understands completely that Eugenides has sent the soldier to help in his escape.

I want to explain how funny Thick As Thieves is, but cannot do so without a major spoiler. In this case, you will have to just believe me that the circumstances conspire to create laughter for the audience, much as the other books within the series.

This is the best quote I can find that doesn’t give away anything strategic in the novel that I found amusing:

“‘It so happens,’ said the Attolian, ‘ that sometimes a young soldier comes to the city from deep in the country and he meets a man in a wineshop who offers to show him the town and introduces him to a ‘lovely girl’. And after the lovely girl has soaked him for all the money in his pocket, the man will offer the soldier a loan. The really naive ones get into so much debt to their ‘friends’ that they have to ask for a touch from the guard’s treasury, from funds set aside by everyone in the cohort for emergencies like this. Until the money gets paid back, they eat their meals standing up in the dining hall.’
I wondered if the Attolian had ever been a backward boy from the country eating his meals standing up. When I saw the flush creeping up past his collar all the way to the roots of his hair, I knew he had.” (p. 203)

I highly recommend Turner as an author. I am a little torn if her books should be a 4 or 5 star recommendation. As the series has continued I am tempted to go back and raise all of their star power in my reviews because of the thoughtful weaving of the tale over the last 20 years. She is a remarkable writer!

If you have enjoyed Turner as an author I would highly recommend reading The Queen’s Poisoner by Jeff Wheeler and A Cast of Stones by Patrick W. Carr. I am confident that you will love their books.

My daughter has been in college and no longer has time to review books with me. Now my younger sons occasionally have something to add to the reviews, though they are not as interested in reading at this time. I continue to read lots of YA literature in the hopes of finding gems for my children to read.

I am a mother of four children and have a passion for reading. I love sharing my treasury of books with my kids. I also do experiments in cooking which includes such things as Indian Tandoori Chicken slow-cooked in a tagine. I write stories and illustrate in ink.
View all posts by Tales Untangled →
This entry was posted in All Time Favorites, young adult book reviews and tagged A Cast of Stones, Attolia, books worth rereading, Costis, Ennikar, escaped slave, Greek roots, hidden clues in writing, Immakuk, impending war, Kamet, Mede Empire, Megan Whalen Turner, Mesopotamian roots, mythology, Nahuseresh, plot twists, quality writing, religion, Sequel to Conspiracy of Kings, The Queen's Poisoner, the Queen's Thief, Thick As Thieves, world building. Bookmark the permalink.