A Time of Love and Tartan – Does Bertie’s Life Get Better?

Book Review : A Time of Love and Tartan
44 Scotland Street 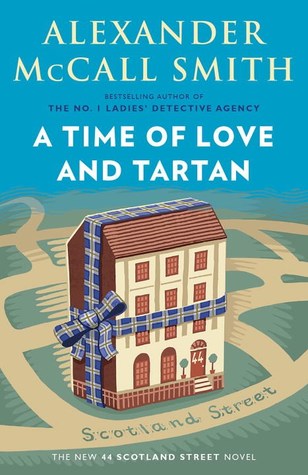 When Pat accepts her narcissistic ex-boyfriend Bruce’s invitation for coffee, she has no idea of the complications in her romantic and professional life that will follow. Meanwhile, Matthew, her boss at the art gallery, attracts the attention of the police after a misunderstanding at the local bookstore.

Whether caused by small things such as a cup of coffee and a book, or major events such as Stuart’s application for promotion and his wife Irene’s decision to pursue a PhD in Aberdeen, change is coming to Scotland Street. But for three seven-year-old boys–Bertie Pollock, Ranald, and Big Lou’s foster son, Finlay–it also means getting a glimpse of perfect happiness.

Alexander McCall Smith’s delightfully witty, wise and sometimes surreal comedy spirals out in surprising ways in this new installment, but its heart remains where it has always been at the center of life in Edinburgh’s New Town. (Courtesy of goodreads.com)

Even though I like many of the characters in the 44 Scotland Street series, the one who keeps me coming back for more is Bertie. I always wonder, will his life get better or worse this time around? Connected to Bertie are the characters we also love to hate; Olive, Pansy and obviously his “cow” of a mother, Irene. At times I even want to slap Stuart (Bertie’s father), just enough to get his attention and to tell him it’s time to grow up and at the same time grow a spine. (Since he’s fictional there is no danger of me actually slapping anyone.) His mother says much the same thing, though with little hope. Though I won’t give away a spoiler, I will say I always feel hopeful for Bertie, and maybe that’s because he is so filled with hope that his life will be better when he grows up.

Why do we love books like A Time of Love and Tartan or The No. 1 Ladies’ Detective Agency written by Alexander McCall Smith? I believe the answer is simple, we see something of ourselves in the characters, something of our neighbors and the foibles of society become clear. We wish things could wrap up nicely, that we could gain wisdom and that our lives were a little more simplified. For example Big Lou sees everything through the lens of her upbringing and it makes her decisions clear for her. She cares for the people she likes, she takes care of those who need care, she reads and serves coffee and bacon rolls. If she has too dark of a dilemma she can fall back on her upbringing.

“Och, away with all that,” said Lou. “What’s wrong with bacon? I know plenty of people who ate bacon every day of their lives. My Uncle Willy, for example…” (p.68)

See how easy that was? According to Lou we can all eat bacon!

Here is a bit of wisdom from the Duke given to Matthew.

“You’re right, of course – every generation thinks its situation is uniquely worrying – but the world has always been on the brink of disaster. Yes, that’s right, but that doesn’t detract from the particular difficulty of specific times.” (p.123)

I love it when Ranald Braveheart Macpherson and Bertie have been exploring in the park. They still have vivid imaginations.

“Bertie did not reply. He did not think it likely that his mother would allow him to keep a body in the flat; there were so many restrictions in his life, and that was just one more of them.” (p.136)

How about the title for one of Pat’s chapters? Doesn’t it show the state many find themselves in, whether they admit it or not? Chapter 36 She Wanted A Man So Desperately

Stuart receives an unexpected invitation, because of his difficult wife.

“Stuart read the print on the card. Men Underground, it said. And then, under that, The Male Resistance. He saw a telephone number.” (p.231)

I always enjoy this series, and even though this is book 14, if you haven’t met Bertie and the rest, pick up the first book. They are a fast, delightful read. I highly recommend them.

I am a mother of four children and have a passion for reading. I love sharing my treasury of books with my kids. I also do experiments in cooking which includes such things as Indian Tandoori Chicken slow-cooked in a tagine. I write stories and illustrate in ink.
View all posts by Tales Untangled →
This entry was posted in All Time Favorites, grown up books reviewed and tagged 44 Scotland Street series, A Time of Love and Tartan, Alexander McCall Smith, Bertie Pollock, Big Lou, books with wisdom, charming books, funny books, good summer reads, humorous books, Irene Pollock, Stuart Pollock, witty books, women's literature. Bookmark the permalink.

2 Responses to A Time of Love and Tartan – Does Bertie’s Life Get Better?