The Apprentice Witch – Would You Trust a Witch-Wash-Out With Your Life? 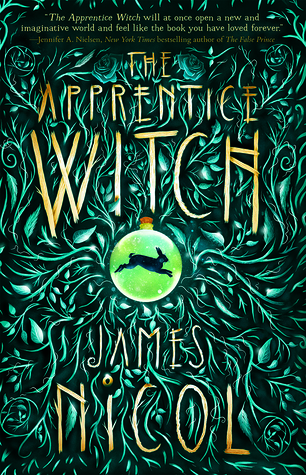 A special middle grade debut of magic and courage in a world of witches, written with the charm and enchantment of Circus Mirandus and The Apothecary.

Arianwyn has flunked her witch’s assessment: She’s doomed. Declared an apprentice and sent to the town of Lull in disgrace, she may never become a real witch– much to the glee of her arch-rival, Gimma.

But remote Lull is not as boring as it seems. Strange things are sighted in the woods, a dangerous infestation of hex creeps throughout the town, and a mysterious magical visitor arrives with his eye on her.

With every spirit banished, creature helped, and spell cast, Arianwyn starts to get the hang of being a witch–even if she’s only an apprentice. But the worst still lies ahead. For a sinister darkness has begun to haunt her spells, and there may be much more at stake than just her pride . . . for Arianwyn and the entire land. (Courtesy of goodreads.com)

In The Apprentice Witch, the world is full of magic – but it’s not distributed equally. Arianwyn (Wyn) suffers from being snubbed by her peers and sticks out when she fails the witch exam. Instead of a shiny gold star, she’s given a bronze moon. And if things couldn’t get worse, she suspects the only reason she even received the bronze badge was from her grandmother’s interference.

I loved Arianwyn’s character development from awkward and unsure of herself to believe she had friends and enough magic to help others. She is selfless, forgiving, naive, trusting, and honest (mostly). It is right on target for a middle-grade audience. Another plus for this book are the creatures from charming, to scary, and friendly. The author did a wonderful job of bringing in new fantastic beasts and avoided the problem of making them so strange that I couldn’t picture them. I also love the rabbit creature who is filled with loads of magic.

I thought the interaction between the Arianwyn and the other two girls, Gimma and Salle was very good. Girls’ can get their feelings hurt easily when a little bit more communication could solve the problem. I liked how Salle was obsessed with the theater, and though it was a small piece of the writing, it added to her character and made her come alive. I’ve seen where some people criticize a book for having a bully, but I think they’ve forgotten what it’s like to be in elementary school. Gimma had a reason for her behavior and I’ve seen plenty of mean girls to believe she’d act entitled and want to snub those she saw as below herself.

I absolutely loved The Apprentice Witch, and I’d trust Arianwyn with my life if dark forces were creeping out of the woods near my home.

If you love James Nicol, check out Jessica Day George’s Dragon Slippers. It’s an older book and one you won’t want to miss. Other fun stories include The False Prince by Jennifer A. Nielsen and the Cove series by J. Scott Savage.

If you can’t find anything to read, send me a message, and I’ll help you find a book. The world is full of adventure, and we all deserve to live it.

I am a mother of four children and have a passion for reading. I love sharing my treasury of books with my kids. I also do experiments in cooking which includes such things as Indian Tandoori Chicken slow-cooked in a tagine. I write stories and illustrate in ink.
View all posts by Tales Untangled →
This entry was posted in All Time Favorites, children's books, middle-grade books and tagged Arianwyn, books compared to Dianna Wynne Jones, books compared to Harry Potter, Books compared to Kiki's Delivery Service, debut novel, fantasy, Gimma, James Nicol, Kingsport, magic, Salle, The Apprentice Witch, town of Lull, witch assessment, witches, world building. Bookmark the permalink.