Siege and Sacrifice – Will There Be A Happy Ending? 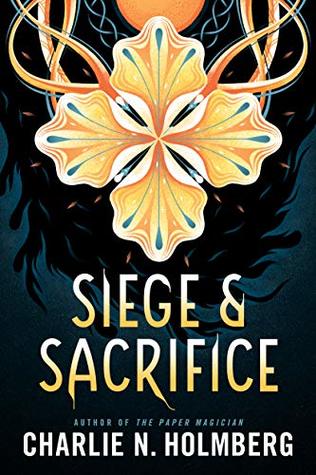 From the Wall Street Journal bestselling author of The Paper Magician Series comes the enthralling climax of a cataclysmic war between monstrous creatures.

Sandis has finally freed herself from her master and his plans to use her as a vessel for the ancient beast Kolosos. But her master has found a new, impossible vessel: Sandis’s brother, Anon—a brother she long thought dead.

Kolosos is ancient, massive, and seemingly unbeatable. Fortunately, Sandis has her own monster—an ethereal fire horse that she can summon at will. In addition, she and Rone may have discovered the secret to defeating Kolosos: ancient lore that details the creation of magic. It could be the key to victory and the key to saving Anon.

The price is steep, and Sandis is willing to pay it. Rone is not, and his attempt to save her only pulls them apart. As both are tested in ways they never expected, Sandis and Rone will need to determine the sacrifices they are willing to make. If their efforts are not enough, their city will fall…just as the ancient city beneath it already has. (Courtesy of goodreads.com)

One of the best things about this series is the magic system. The magic is well thought out with limitations that make success nearly impossible for the main characters. It is also exciting to see how the magic system expands and our perception change as we learn more about the world. This is one of the best magic systems I’ve read in recent years.

The big question is will anybody be happy by the end. Siege and Sacrifice lives up to its name with danger, threats, death, mayhem, and ultimately sacrifice. I will say that some of the characters are happy by the end…or find a sort of happiness.

To learn who’s happy/happy-ish, you’ll have to read it since I don’t want to spoil the surprises.

I recommend this book for young adults over sixteen. I think it’s a little complex for younger children. (There is cursing, violence, murder, and nudity – but no sex.)

If you loved Myths and Mortals, try The Darkwater Sage by Patrick W. Carr and Incarceron by Catherine Fisher.

If you can’t find anything to read, send me a message, and I’ll help you find a book. The world is full of adventure, and we all deserve to live it.

I am a mother of four children and have a passion for reading. I love sharing my treasury of books with my kids. I also do experiments in cooking which includes such things as Indian Tandoori Chicken slow-cooked in a tagine. I write stories and illustrate in ink.
View all posts by Tales Untangled →
This entry was posted in young adult book reviews and tagged ancient lore, books by author of The Paper Magician, Charlie N. Holmberg, ethereal fire horse, how is magic created, Kolosos, lost brother Anon, magic vessel, monsters, Numina Series, Rone, Sandis, Siege and Sacrifice. Bookmark the permalink.