Crossings – What Would You Do If You Crossed Time? Find Love? 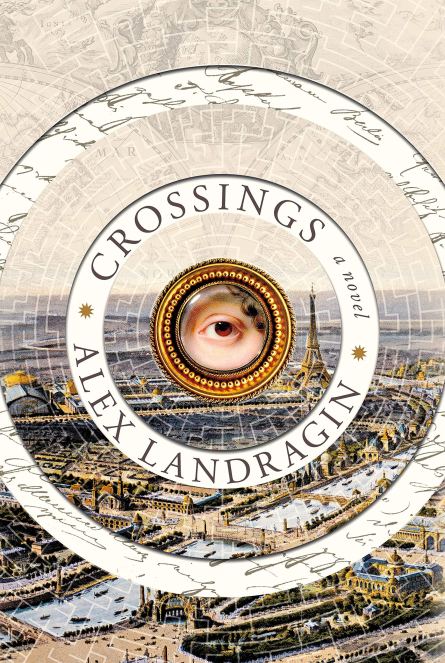 Crossings is an unforgettable and explosive genre-bending debut–a novel in three parts, designed to be read in two different directions, spanning a hundred and fifty years and seven lifetimes.

On the brink of the Nazi occupation of Paris, a German-Jewish bookbinder stumbles across a manuscript called Crossings. It has three narratives, each as unlikely as the next. And the narratives can be read one of two ways: either straight through or according to an alternate chapter sequence. The first story in Crossings is a never-before-seen ghost story by the poet Charles Baudelaire, penned for an illiterate girl. Next is a noir romance about an exiled man, modeled on Walter Benjamin, whose recurring nightmares are cured when he falls in love with a storyteller who draws him into a dangerous intrigue of rare manuscripts, police corruption, and literary societies. Finally, there are the fantastical memoirs of a woman-turned-monarch whose singular life has spanned seven generations. With each new chapter, the stunning connections between these seemingly disparate people grow clearer and more extraordinary. Crossings is an unforgettable adventure full of love, longing and empathy. (Courtesy of goodreads.com)

I received a copy of Crossings from NetGalley in exchange for my honest opinion.

I would classify Crossings as a concept book. The concept is how you choose to read – straight through or in a mixed-up order as suggested by the woman who owned the manuscript.

My intention was to read it in the artsy order and see how it went. The “suggested” order was a little confusing – especially since the narration is first-person. I would have finished it in this way, but my Kindle suddenly went into a loop when I tried to choose the new place. After that blip, I finished reading it in order, skipping any chapters I’d already read. Then after I hit the end, I went back and started from the beginning and read straight through for a little bit. After examining the chapter titles, I realized I had read the entire novel in, yet again, a different order. Whew! I don’t even know if you care about all of that, but since I received this as an ARC, I feel like I have to disclose my experience. I bet the blip I hit was solved.

Romping through time highlights man’s inhumanity to man in the lens of the two characters crossing into other people for generations. The book doesn’t make a direct commentary on the atrocities, but they’re always there from broad sweeping problems like slavery and the Nazi regime hunting down Jews to the small pains we inflict on individuals. Love is another theme carried through the book. Even when the reasons for actions become murky, love was the original force. I contemplated how love might change us as well as how love might drive our actions.

I enjoyed Crossings for its clever concept and also for the writing and broad view. If I had my druthers (do people say druthers anymore?), I would have liked a little more emotional resonance in the situations. How heartbroken was he when the woman he loved pushed him away? How did she feel when her true love didn’t recognize her? Did each life they live leave scars that affected their actions as a new person? I’m not saying it was a list of facts, only that I wanted a little more emotion.

My favorite moments in the book were when Madeline and the “admirer of Baudelaire” interact. I feel like this section is the glue that makes the other storylines pull together into a cohesive whole. I also felt the most emotion from this storyteller.

Crossings is an excellent debut novel and I highly recommend it – I believe it will appeal to people who love historical fiction as well as fantasy. The twists and turns will keep your wits sharp.

If you liked Crossings try The Lost Book of the Grail by Charlie Lovett, The Great Passage by Shion Miura, and The Gray House by Mariam Petrosyan.

I am a mother of four children and have a passion for reading. I love sharing my treasury of books with my kids. I also do experiments in cooking which includes such things as Indian Tandoori Chicken slow-cooked in a tagine. I write stories and illustrate in ink.
View all posts by Tales Untangled →
This entry was posted in grown up books reviewed and tagged adventure, Alex Landragin, Australian authors, books similar to Crossings, Charles Baudelair, choose your own adventure for adults, Coco Chanel, concept books, Crossings, debut authors, fantasy and historical fiction, love, Nazi occupation of Paris, nightmares, relationships, slavery, Walter Benjamin model, world history. Bookmark the permalink.